Home » Blog » Web Support & Maintenance » Is Another Site Slowing Your Website Down?

As discussed before, it is best to avoid reliance on third parties to facilitate critical parts of your Web site (widgets, feeds, api integrations, etc). The reasoning being that if the third party has an issue, goes down or changes it could have consequences on your site’s performance.  However sometimes a site might be reliant on a third party without purposeful integration.

Recently we were working on a site and trying to figure out what was causing slow page load times. The culprit: three javascript files located on the original developer’s server. These were not being cached or compressed and were being called on each page. Simply moving these java script files amongst the rest of the site’s files on the primary server, significantly reduced load time.

How We Figured It Out

We used GTmetrix.com’s free performance report, a personal favorite tool of mine. A quick test produces a waterfall timeline, as seen below. This allows us to quickly identify speed bottlenecks. In the image below you can easily see the three javascript files that were slowing the site down. What you cannot see is that the report also includes file name and full URL of it’s host, allowing us to quickly figure out that a third party was causing this slow down. 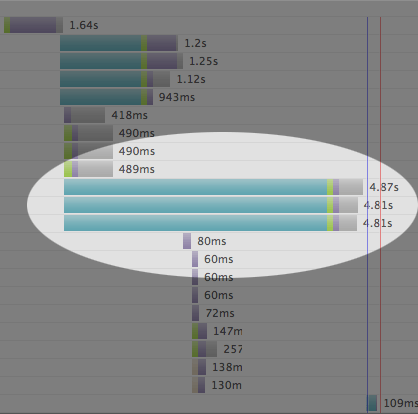 Plugins, XML, widgets, APIs, etc. are all so convient because they allow you to easily include content, functions and features...

Keeping Up with CMS Security

CMS's Like WordPress Require Constant Attention to Security CMS based systems are simply not build-and-forget-about-it platforms, but rather require regular...

I Bought A CMS, Why Do I Need Web Support?

When you had your website built you no doubt paid extra to have it built on a content management system...

FatLab, LLC is a proud Virginia, USA Corporation serving organizations throughout the United States and beyond. We pride ourselves on providing the best client-centric website support and website maintenance services possible. We have partnered with top-tier infrastructure and service companies to provide enterprise-level website security, WordPress hosting and monitoring solutions. We are huge fans and thankful for open source technologies.